Watch out, your site is about to be transcoded by Google on slow mobile devices. 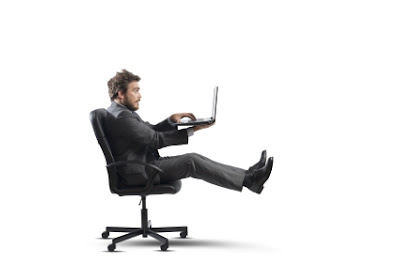 According to a post on Bruce Clay's blog by John Alexander, Google is going to make slow and non-mobile friendly sites to be fast and friendly with its new transcoder. The transcoder makes a much better user-experience for those on a slow mobile connection. Is this a good thing?

You can decide for yourself by checking out the Google transcoder page to see how your site renders when transcoded. 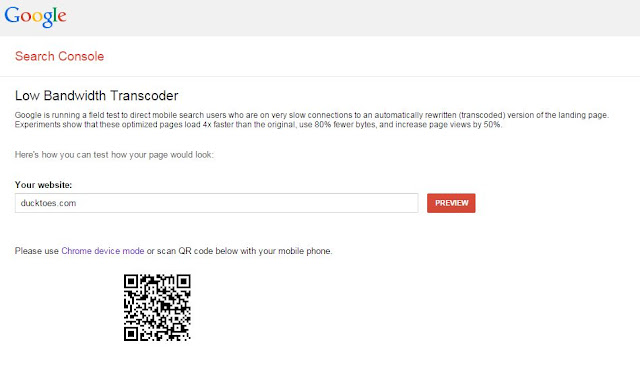 How to view your transcoded website:
1. First go to Google transcoder site.
2. Type in the URL for your site and hit preview.
3. Scan the QR code with your smart phone.
4. Voila, you will see how your site looks once transcoded to the mobile user.

You can also use the method outlined in the Bruce Clay post (cited at top of this post) to render your website on your computer screen.

A couple of worries I have about the transcoder are:

If you've taken great pains to make your mobile site look really good on mobile devices, you may not like Google's speeded up version.

If you want help making your site search engine friendly check out Ducktoes Seo Services in Calgary.
Posted by Cathie Dunklee-Donnell at 8:45 AM 2 comments:

Twice in the last week I've gotten an email from Google Webmaster Tools telling me that client sites are not mobile friendly.  They look like this: 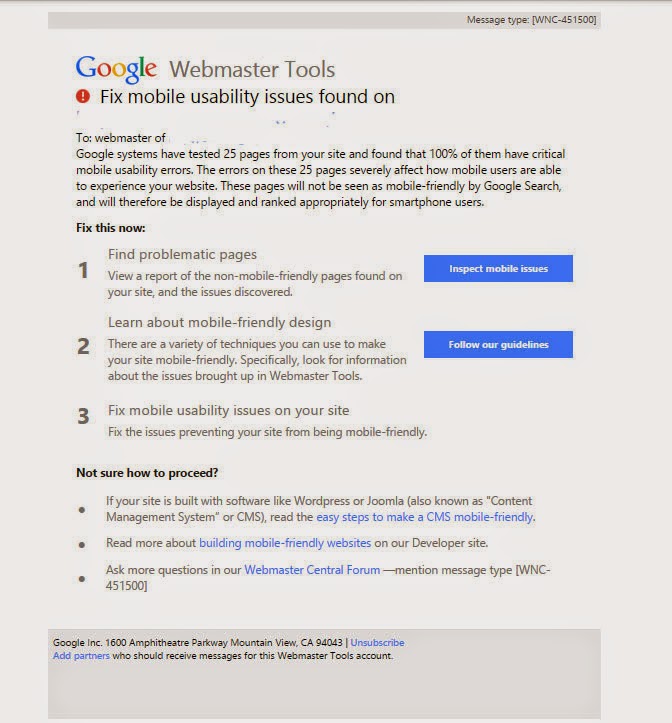 I really appreciate this because it will motivate my clients and me to get all our client sites mobile-friendly which I want them to be anyway.  It gives me a reason to urge reluctant clients to come onboard with the mobile responsive changes.  Also Google may start including mobile responsiveness as part of their ranking algorithm and this gives my web designers and me a chance to fix them before the ranking begins.

According to Search Engine Land, Google is sending these emails to a massive amount of webmasters and company owners.
Posted by Cathie Dunklee-Donnell at 8:36 PM 1 comment:

Sitemap your Site for SEO

There are two different types of sitemaps, .xml and html.  The first you do for bots and the other for people. Both are great for SEO.  Both are white hat SEO techniques if you want to crank up rank without risking Penguin or Panda penalties.


XML Sitemap
The .xml one you can make with a free tool at XML-Sitemap.com. You then log into your Google Webmaster Tools and upload it. Now the bots are more likely to find and index all the pages on your site.


Html Sitemap
The Html sitemap is just a web page listing all the links within your site, so your users can easily find what they are looking for.  Google and other search engine love user-friendly sites so you can't go wrong with making things easier for the visitors to your site.

You can use important keywords for the various pages on the html one, in fact you should use keywords.  After creating the sitemap, put a link to it in the menu where it is easy to see and use. 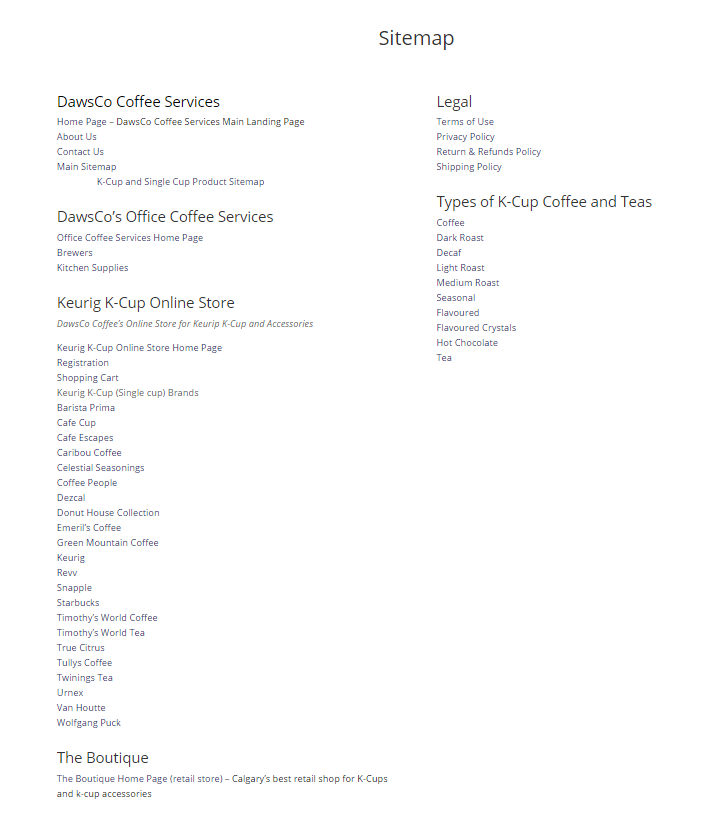 If you'd like help making your sitemaps, Ducktoes SEO Services of Calgary can do it for you.
Posted by Cathie Dunklee-Donnell at 9:06 AM 2 comments:

Pigeon Unrolled in Canada on December 22

The Pigeon has Landed 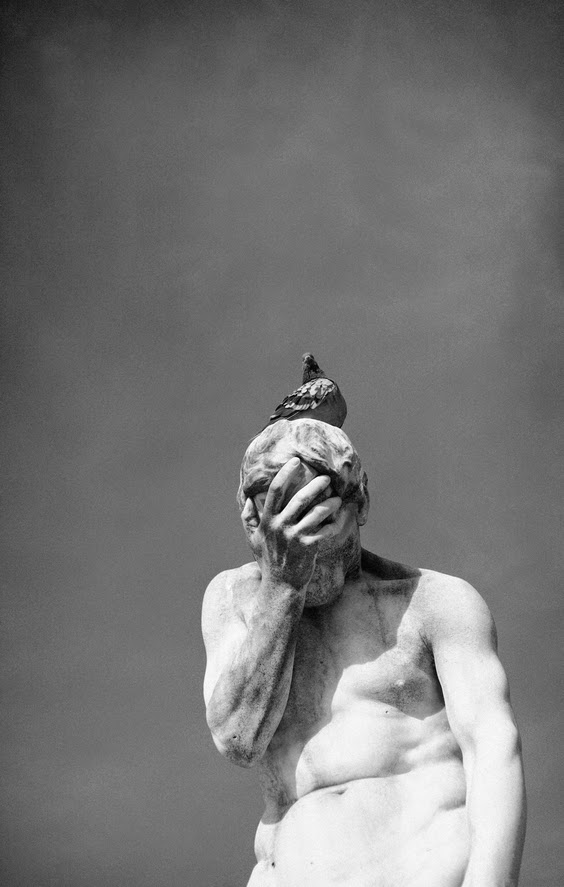 Those who know me know I always follow ranking closely, an understatement, since really I'm obsessed with it. It's no surprise then that on December 22, 2014, I noticed right away that most of my sites and client sites had changed ranking in local listings. One of my client sites went from 6th in ranking to 1st organically and to 2nd on the map from 3rd.  Another went 2nd on the map to 1st and 2nd organically.  Another went from the 2nd page to first organically.  Another finally showed up on the map for a keyword.  The SERPs they were a-changing.  So many changed that I knew something major was afoot (should I say awing? Lol.)  I suspected that Google's Pigeon update had just landed in Canada. (And no, I don't mean or am misspelling Penguin, this is a totally different bird and Google update.) Pigeon had unrolled in the US in July and was due to unroll in other English-speaking countries as in Canada, UK and Australia sometime this last fall. Even though I suspected Pigeon right away, I couldn't find confirmation of it online for a few days except for a few random rumblings and tweets from others suspecting the same thing.

Most of my sites went up luckily and only a couple went down on the Google local listings with Pigeon so I was pretty happy. Yet local listings themselves had also changed and in places quite dramatically. Where once seven businesses had been listed on the first page in Google results for certain queries, now were only three. Some search queries even lost their local listing packs completely.

Here is an example of a seven pack listing for the query "Calgary computer repair" previous to the changes: 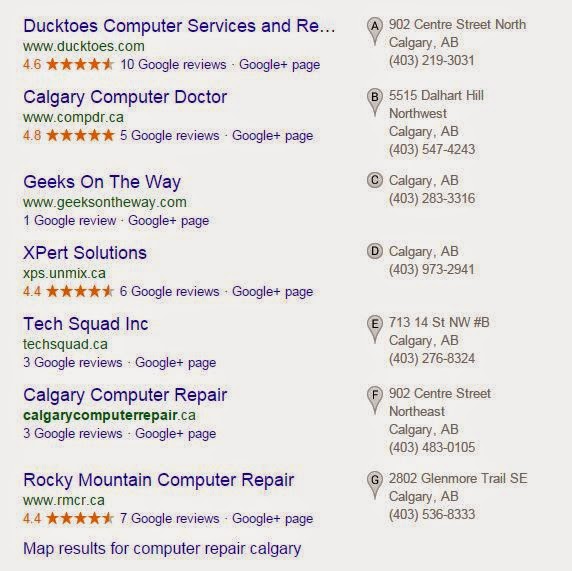 Now the listings are in a three pack:

As you see can above only three businesses are listed for the same query where before there were seven.  If  your company was number four to seven on the local listings map, it now didn't show at all.

Finally I saw this post on Blumenthal's blog confirming my hunch.  (By the way, if you want to learn more about local search Blumenthal's is the blog to read.) Yes, Pigeon had unrolled! Now local search in Canada is very different and, a week and a half later, still seems to be unsettled and in a bit of turmoil, the site listings shuffling around in ranking and in and out of the smaller three packs.

For more in depth information about Pigeon in general, read this post from Search Engine Land.

If you want to improve local search ranking for your website, Ducktoes SEO can help.  As you can see above we are number one for an important and competitive query.  We can help you achieve similar results.

On October 17, 2014 Penguin unrolled again finally. This one is being called Penguin 3.0.  If you used the disavow tool and used it correctly then you'll find your poor ranking has improved or is improving.  If you had a lot of bad links or too high of percentage of keyword-rich anchor text, your ranking may have gone down.  Clients who turned to me for Penguin penalty recovery are now back on the first page.

Here is an infograhic from a great post about recovering from Penguin penalties.  It's from Ahref''s blog.  Ahref is a tool that I find very useful for finding and analysing backlinks.

This infographic is from http://blog.ahrefs.com/.

If you want to discuss this or have an observation that is relevant, please leave a comment.  All comments that are just their for a link, will be deleted. Thank you.

This is the End (of Yahoo Directory) 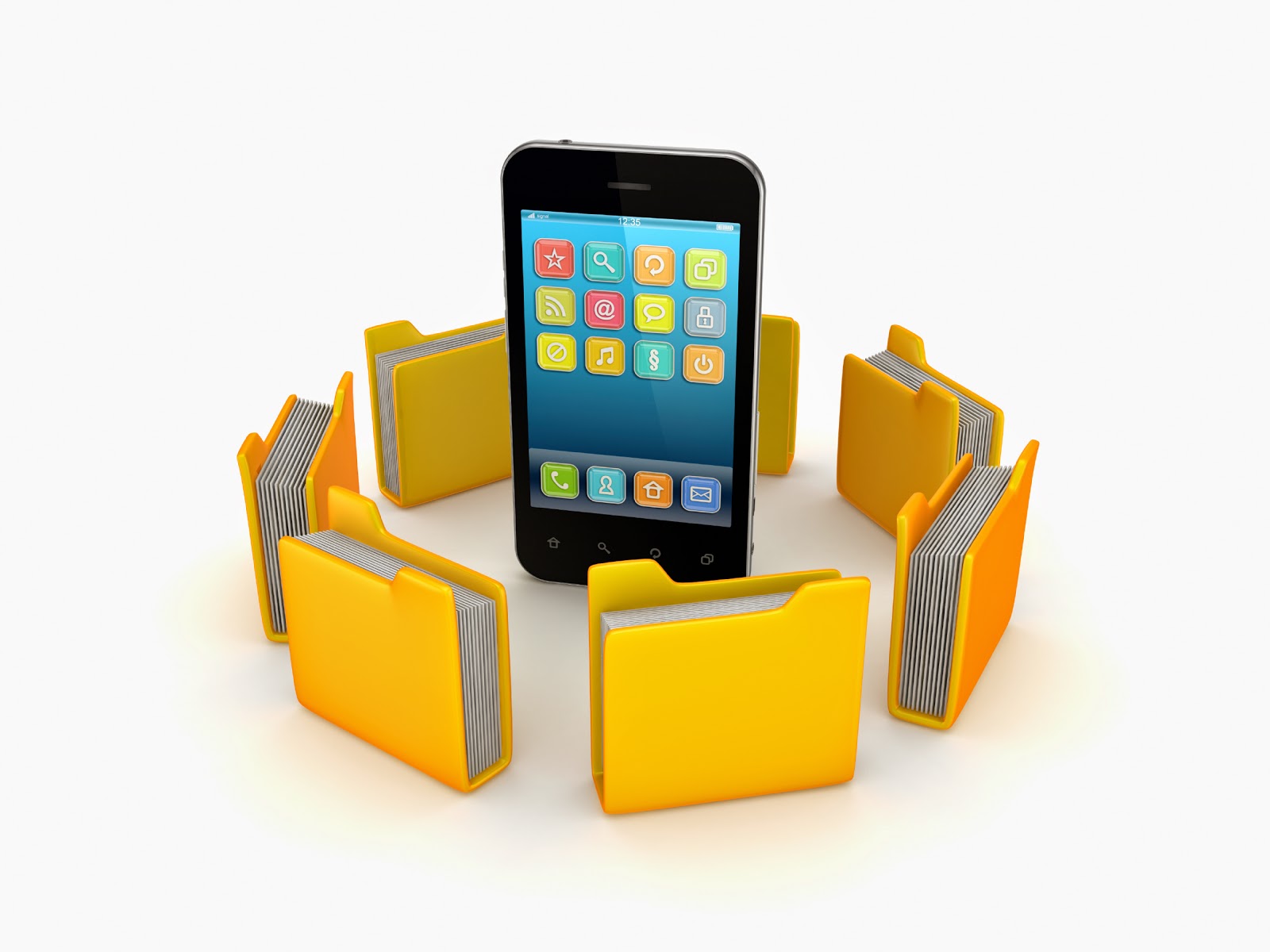 Yahoo announced on it Tumblr site that it is going to close the Yahoo Directory.

This is what the report says, "Yahoo was started nearly 20 years ago as a directory of websites that helped users explore the Internet. While we are still committed to connecting users with the information they’re passionate about, our business has evolved and at the end of 2014 (December 31), we will retire the Yahoo Directory. Advertisers will be upgraded to a new service; more details to be communicated directly."

Since I usually recommend to my clients that they buy a listing in Yahoo directory to help improve traffic and exposure to their web content, now I want to wait until December 31, 2014 and see what the new advertising will be like before recommending it.

In the meantime I still recommend Best of the Web and Dmoz directories. I met the Best of the Web directory representatives at Pubcon and they are a great company and reputable, effective directory.  I'm now a Dmoz editor, just learning the ropes and am really happy about that.

In the meantime if you want to get on the waiting list to be a Ducktoes internet marketing client, contact me.
Posted by Cathie Dunklee-Donnell at 8:40 AM 1 comment:

Email ThisBlogThis!Share to TwitterShare to FacebookShare to Pinterest
Labels: Directories

Directories can be Problematic 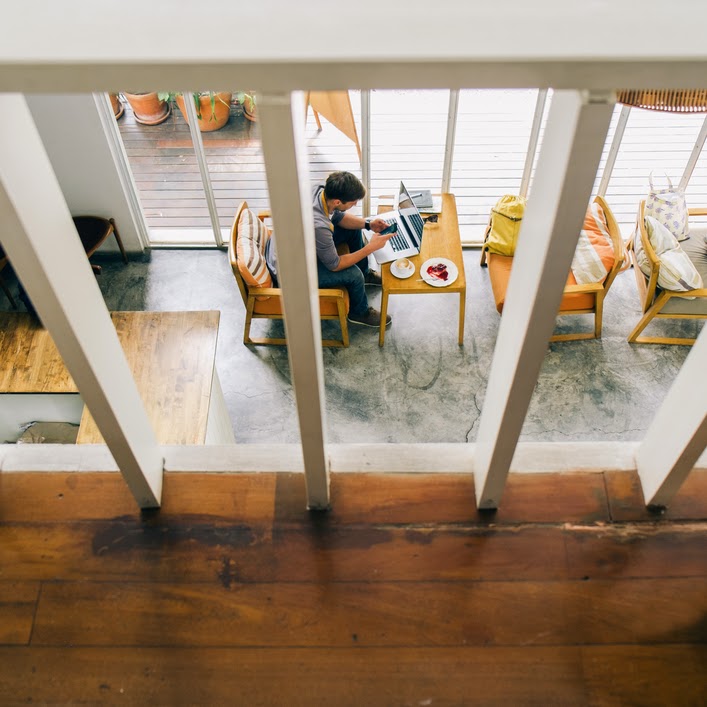 Directories can be problematic in SEO.  You don't want to be listed in spammy, low-ranking ones. Even high ranking ones can be devalued or penalized by Google and end up being low ranking or toxic. Sometimes the directory owners, especially the owners of penalized directories, ignore your request for removal or make it impossible to request it, and then you have to disavow them.

Local directories are good to submit to.  They help you rank organically and on the local Google map for your search terms.  Woorank has an excellent list of local Canadian directories that I refer to as a resource all the time.  They also have local directories for the US and other countries.

How to Find Bad Links

Have you had a significant drop in traffic and ranking? You probably have bad links pointing to your site.  If so, they could be hurting... 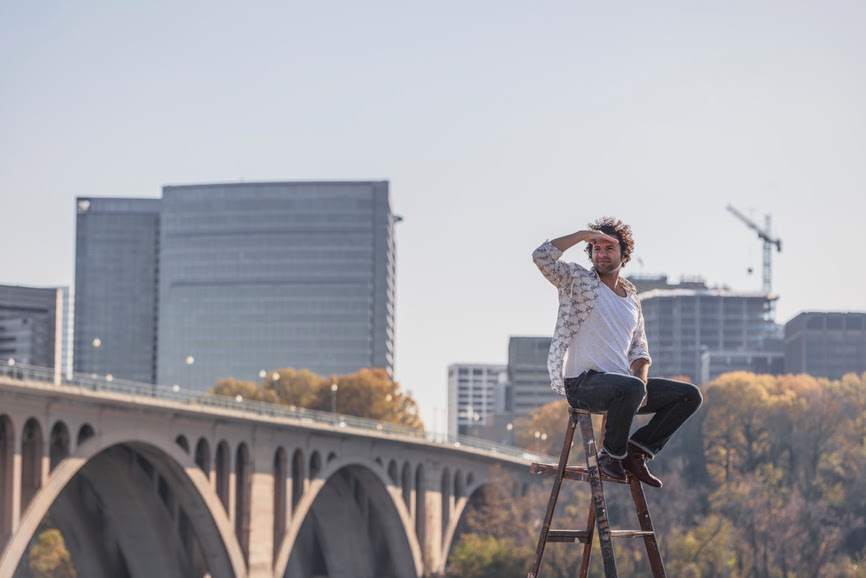